There's a new fantasy/monster/horror/adventure comic coming soon from Kult Creations - HELGA FRANKENSTEIN: BLOOD & TAXES and you can back it right now on KICKSTARTER! 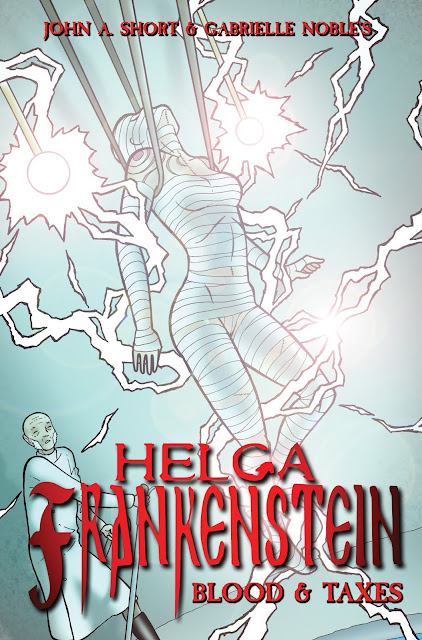 This 42 page full colour self-contained comic is in prestige format.

"Amongst the high mountains at the heart of Europe, where even the power of the Christian church cannot reach, lies a hidden land… A haven for ungodly creatures of every shape and kind, living in relative peace with mortal men… Here lives a woman made from the dead remains of others, shocked into life rather than born. The daughter of infamous Victor Frankenstein.

The powerful vampire authorities have their eye on Helga and she cannot escape their gaze. And where does the mysterious bride of Christ stand in this conflict. Who’s side is she on and what could drive her to travel to such a Godless corner of the globe?

All will be revealed in the self-contained horror adventure: Blood & Taxes! Written by (National Comics Award winner) John A. Short & illustrated by Gabrielle Noble (Captain Wylde)" 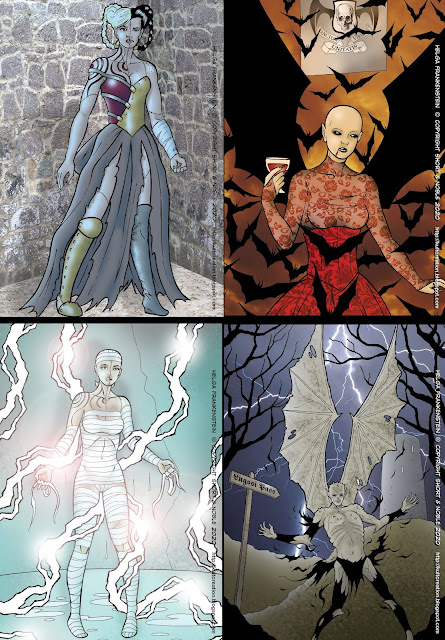 With many exculsive treats that won't be available once we publish... Please consider backing this project before 8th March 2020!

https://www.kickstarter.com/projects/1336023535/helga-frankenstein-blood-and-taxes?ref=nav_search&result=project&term=helga
Posted by John A. Short at 04:49 No comments: 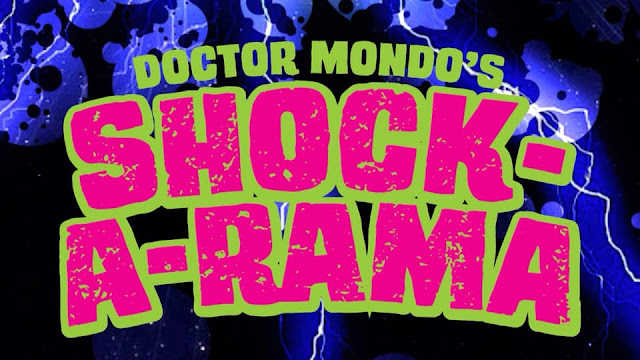 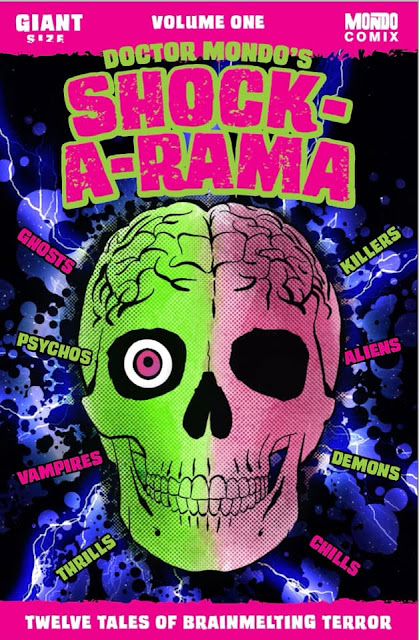 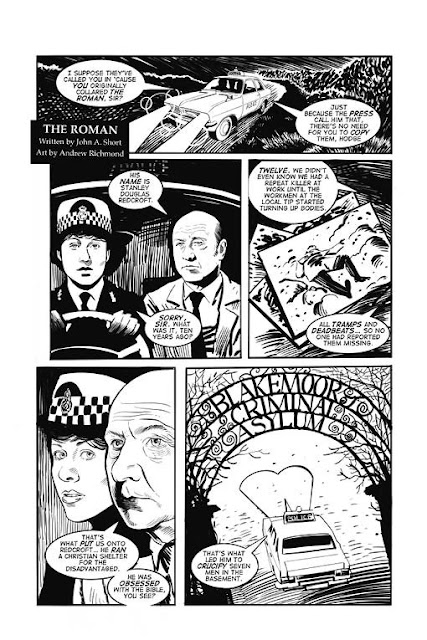 Very pleased with how this horror story of mine has come out. It's some of Andrew Richmond's best art ever.
DON'T MISS IT! https://www.kickstarter.com/projects/mondocomix/doctor-mondo-presents-shock-a-rama?fbclid=IwAR3Y6S78SnhP6ypmc0S2Q8ZU7XggAko-rIGohXwex5JQbVaVg759piOGJyc 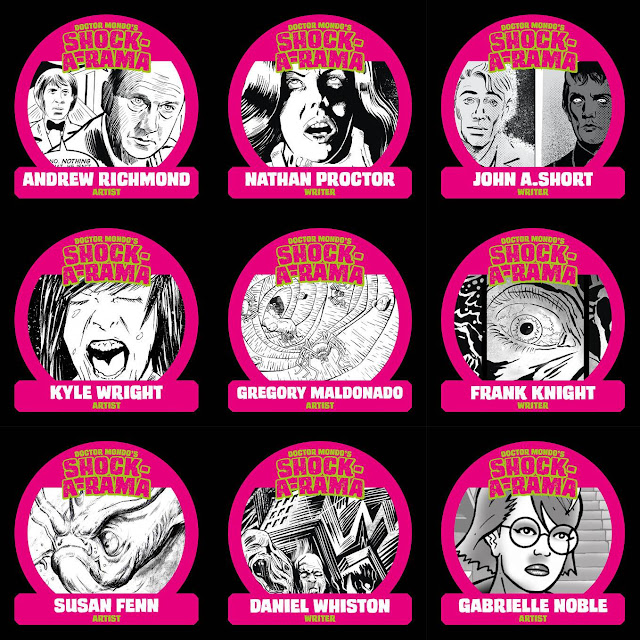 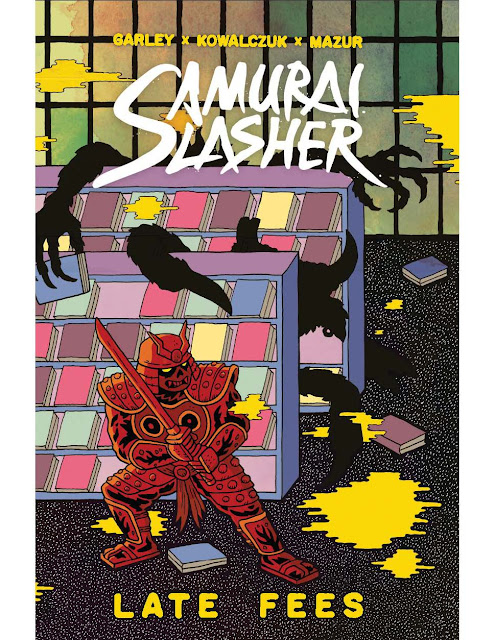 Title: SAMURAI SLASHER: LATE FEES
Format: AMERICAN COMICS FORMAT. COLOUR
Length: 22 STORY PAGES
Price: £5
Publisher: MIKE GARLEY
Creators: WRITTEN BY MIKE GARLEY, ILLUSTRATED BY LUKASZ KOWALCZUK,COLOURS BY LUKASZ MAZUR
Available from: https://mikegarley.bigcartel.com/product/samurai-slasher-late-fees
Review:
Not what I was expecting.
This comic is a rather touching and thoughtful comic about the relationship between a boy and his troubled father seen through the prism of 1980s video rentals. The Samurai Slasher of the title is merely a fictional 1980s horror movie that provides added colour and fantasy to what is a bittersweet domestic tale of family troubles and estrangement.
The art is vivid, cartoony and modern. The colours are bold and striking. The setting is familiar to anyone who lived through the 1980s. The storytelling is very easy on the eye.
It reads as if this is a personal tale to the writer, but that isn’t spelt out. Is this an autobiographical story? In the end it doesn’t matter, because clearly it could be.
Worth your time to seek out and ponder it’s means for yourself. 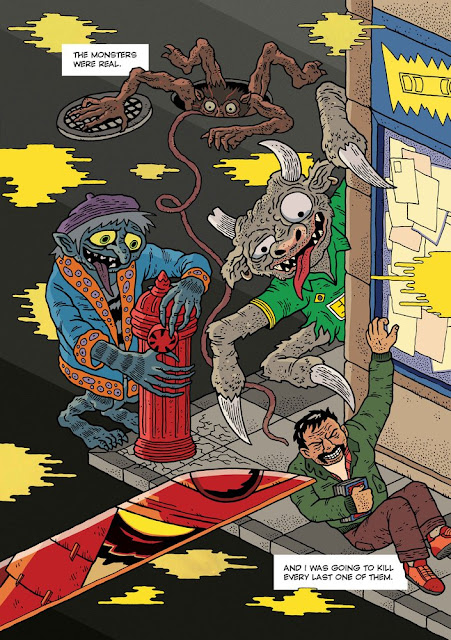 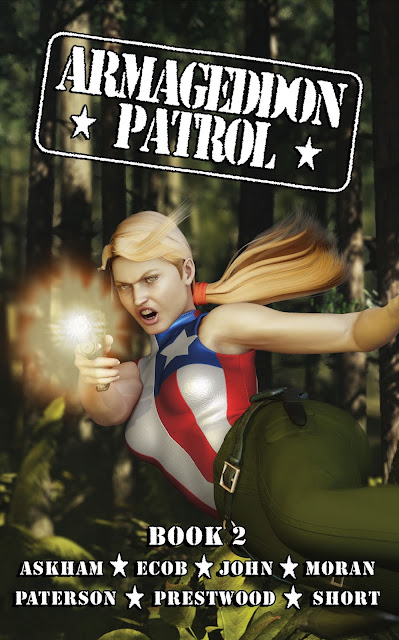 WHAT IF SUPERHEROES HAD FOUGHT IN VIETNAM?

At last the second collection of the critically acclaimed series is available! Gathering together the final five issues of the Alchemy Texts comic from 2002 – 03 (including the ‘First Mission’ mini-series!) All stories written by John A. Short (Reverend Cross/Diabolica) with art by Chris Askham, Simon Ecob, Craig John, Paul Moran, Alex Paterson & Stephen Prestwood! Covers by Craig John!

Over 120 pages of gritty, foul-mouthed, bloody jungle warfare with Maiden America and her band of freaks and misfits! Black & white with colour covers. 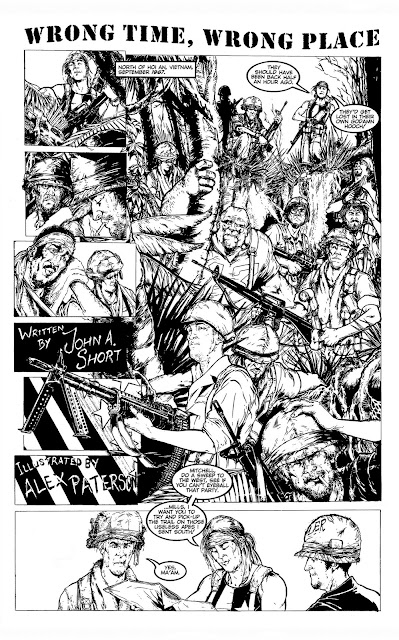 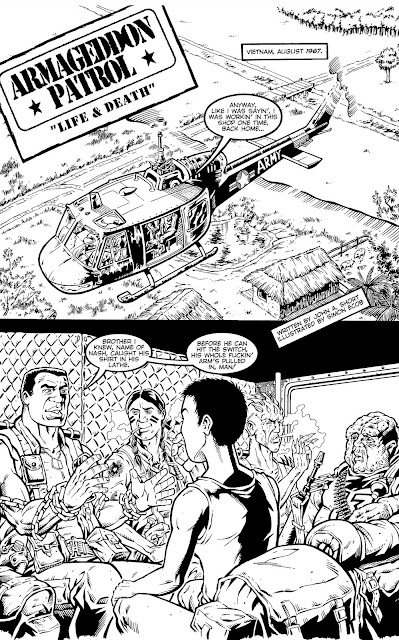 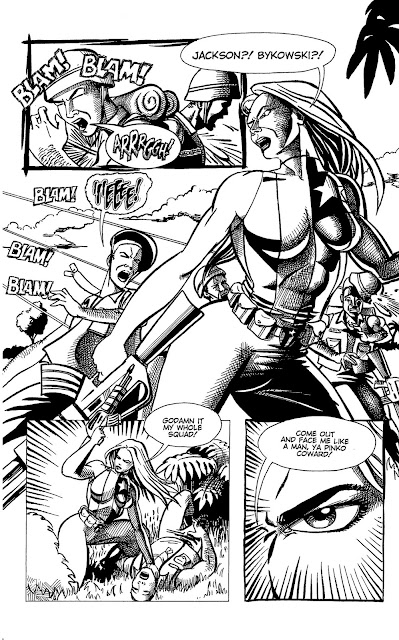 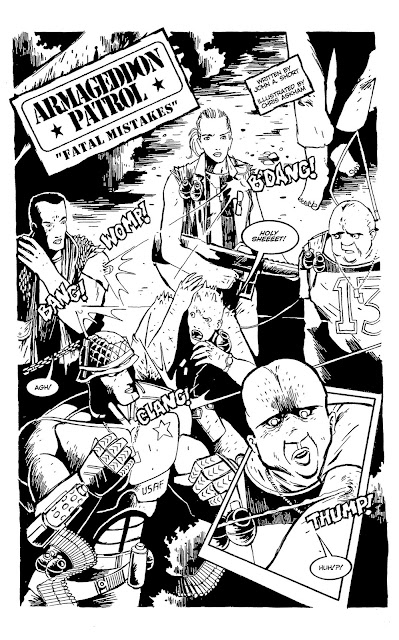 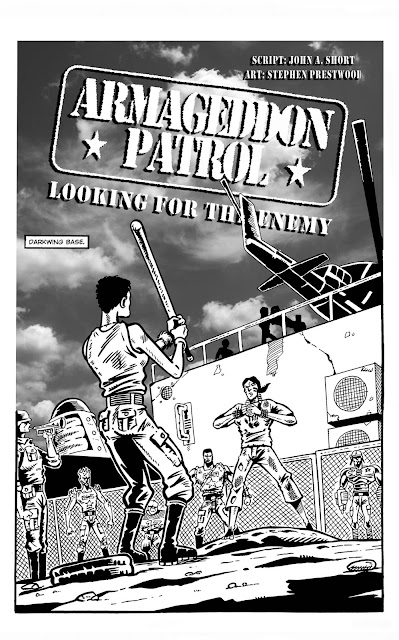 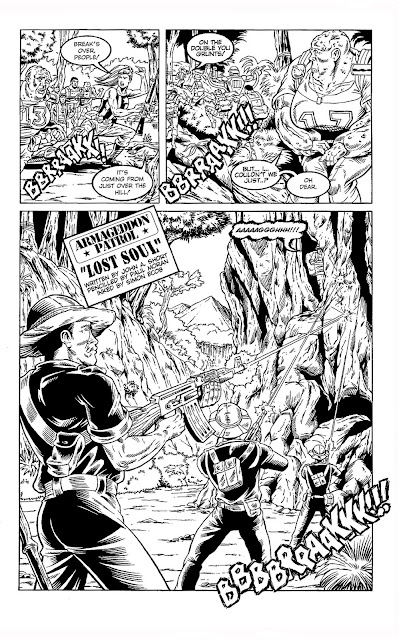 DIABOLICA on it's way!

DIABOLICA: DOWN THE RABBIT HOLE - the new comic written by John A. Short and illustrated by David Hitchcock published by Kult Creations is now back from the printers and on it's way to our fantastic Kickstarter backers! We hope to have all copies to you all by the end of August 2019!
And it's on sale from this very page too (if you missed the Kickstarter!) Please look to your right! 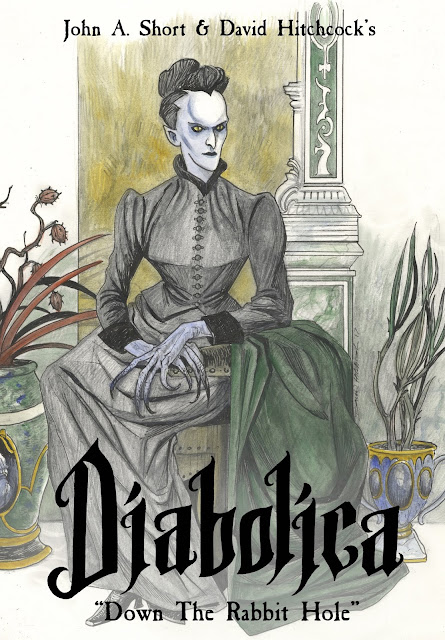 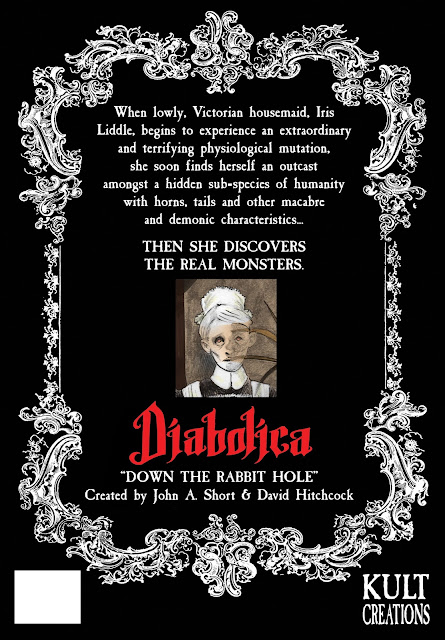 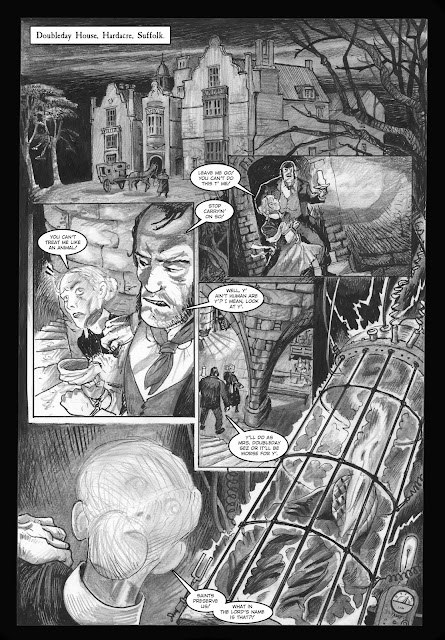 ARMAGEDDON PATROL BOOK 1 - BACK IN PRINT!

WHAT IF SUPERHEROES HAD FOUGHT IN VIETNAM! The original four issues of Armageddon Patrol SOLD OUT! So we printed a book collecting those four issues! It SOLD OUT! But now it's back in print and on sale on this very page! Join MAIDEN AMERICA and the rest of the patrol for some action in the steaming jungles of South East Asia! Please bring your own swear box (their's is full!) 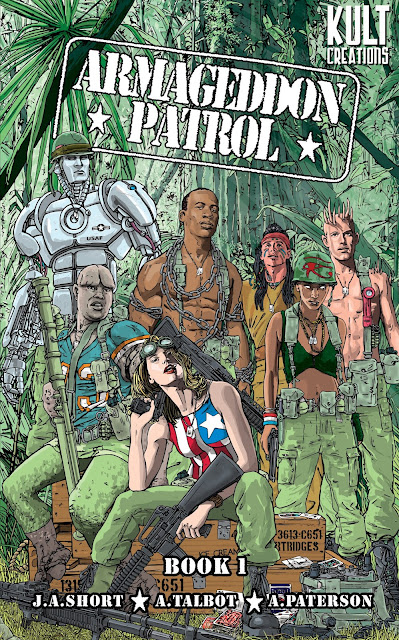 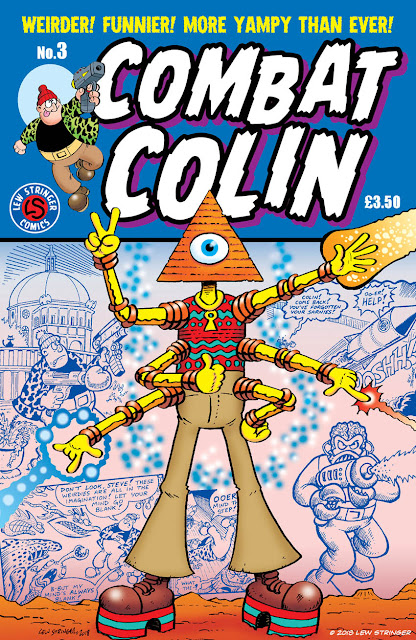 Title: COMBAT COLIN 3
Format: AMERICAN COMIC SIZED. COLOUR COVERS B/W INTERIORS
Length: 40 pages Price: £3.50
Publisher: LEW STRINGER COMICS
Creators: PLOTTED, SCRIPTED, PENCILLED, INKED, LETTERED & COLOURED BY LEW STRINGER
Available from: http://lewstringer.com/page7.htm
Review: Colin and his sidekick (Semi-Automatic Steve) are back for a third issue! This time it’s reprinting many of the full-page comic strips from UK Marvel’s ‘Transformers’ weekly between 1989 and 1990.
No-longer hemmed in by the half-page format Lew’s imagination soars on these strips. In fact he uses that full range of his talents by letting some of the stories unfold over multi-issue story arcs. This let’s Colin visit Venus and even get kidnapped to a village in North Wales in a wonderful spoof of 1960’s TV show ‘The Prisoner’!
There’s a wonderful daftness to these tales… For example, Colin’s rocket-ship sits with a stick in a giant milk bottle… A Colin drills to the Earth’s core at one point with “A very long drill bit”!
And there’s also lovely subversions of storytelling norms and the format of the strip… One strip has some key balloons written in ‘Combat code’ (along with a key for cracking it)… Another strip is taken over by Colin and Steve’s girlfriends in ‘The Giggly Sisters’ Nice Page’ (Next week – How to knit a B-52 bomber!)
This is a masterclass in humour strip writing (and illustration.) It makes me wish that Lew would write something book length!
Not only that but there’s a lovely feature about Odham’s 1960s comics line – Wham! Pow! Smash! Terrific and Fantastic – in the back of the issue.
So put on your combat trousers… grab your atomic underpants… and settle down in the combat shed for a damn good read!

Buy ARMAGEDDON PATROL BOOKS 1 + 2 TOGETHER below! 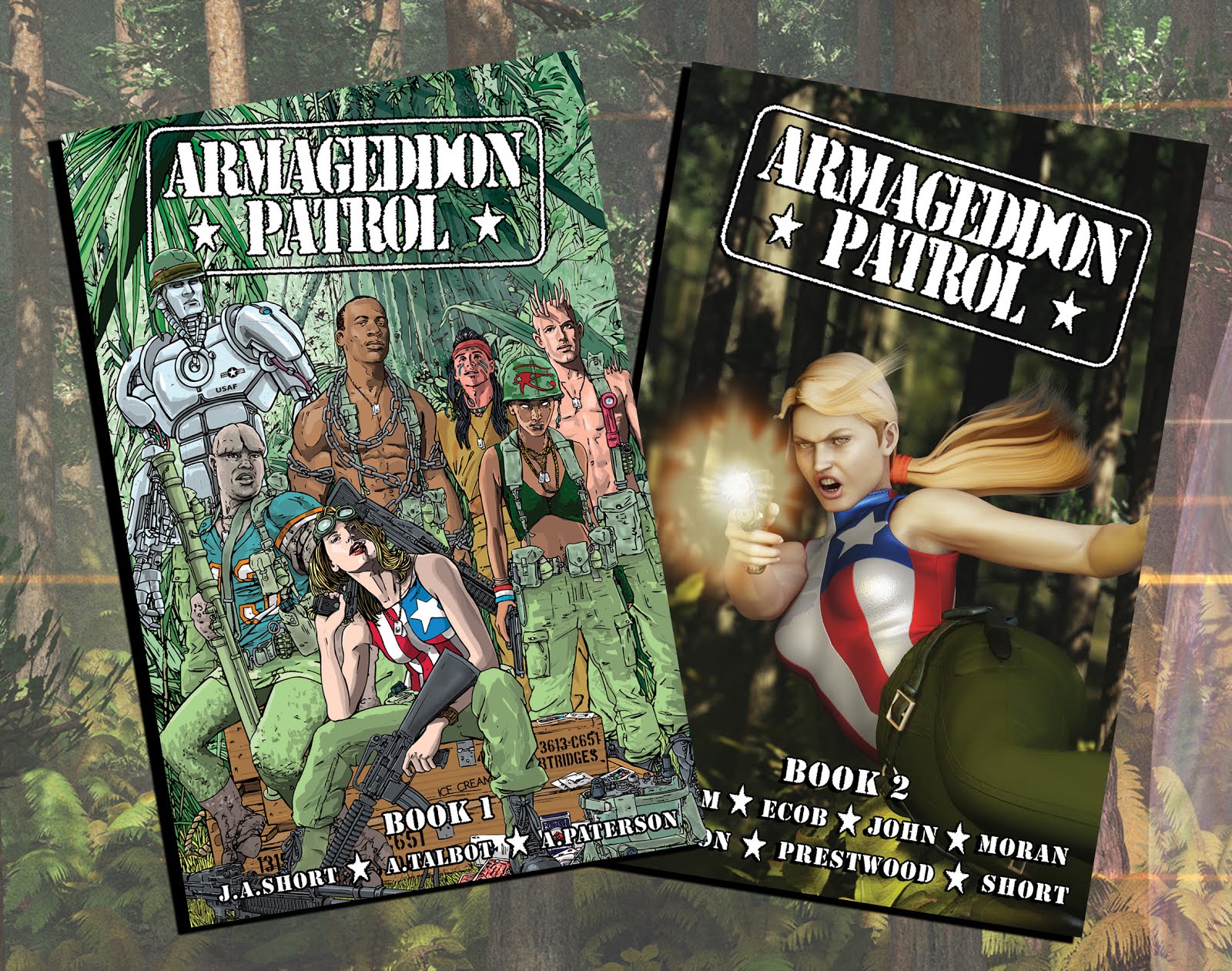 Buy ARMAGEDDON PATROL BOOKS 1 + 2 TOGETHER below!

OUTSIDE EUROPE customers for both ARMAGEDDON PATROL BOOKS 1 + 2 @£29.99 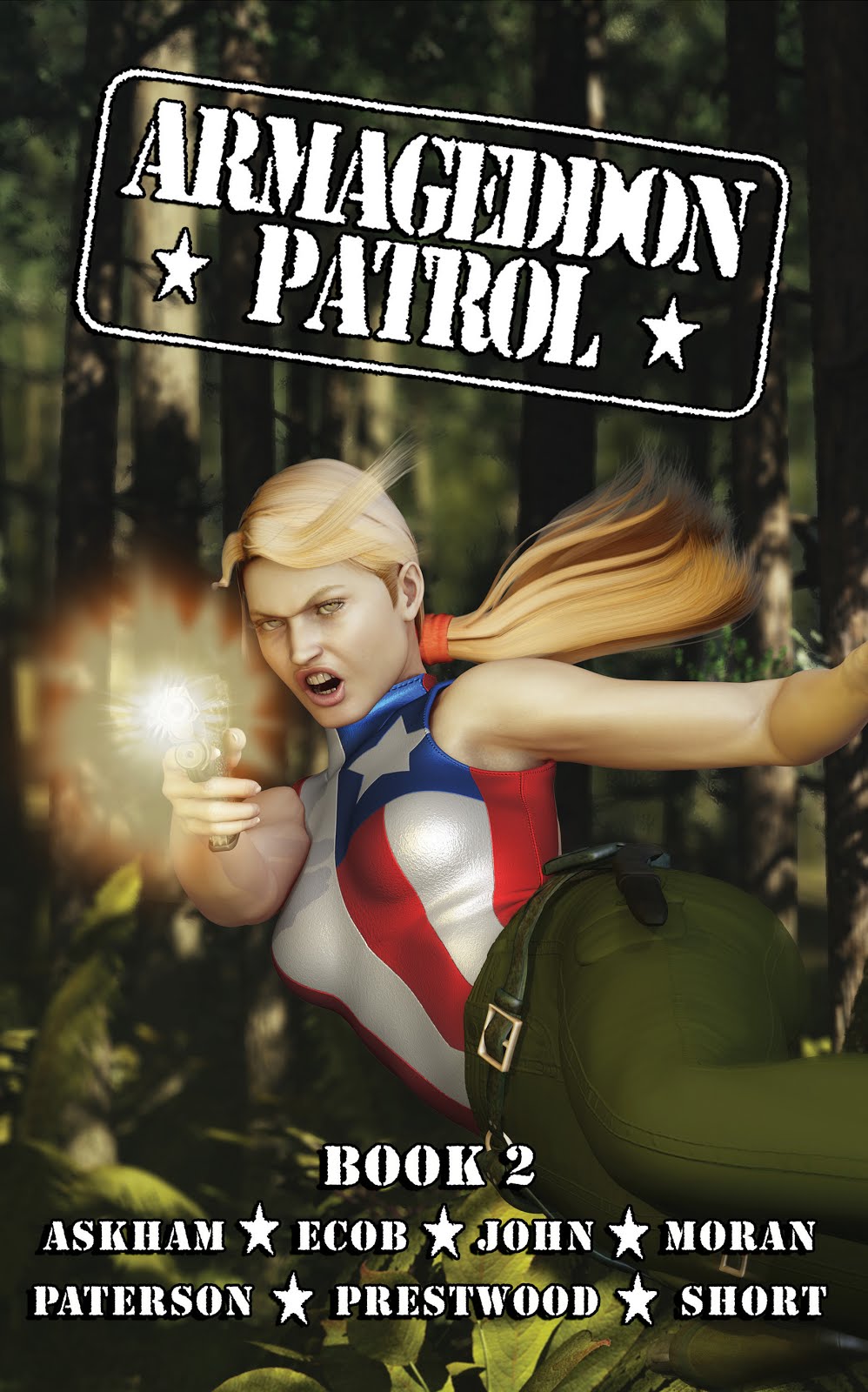 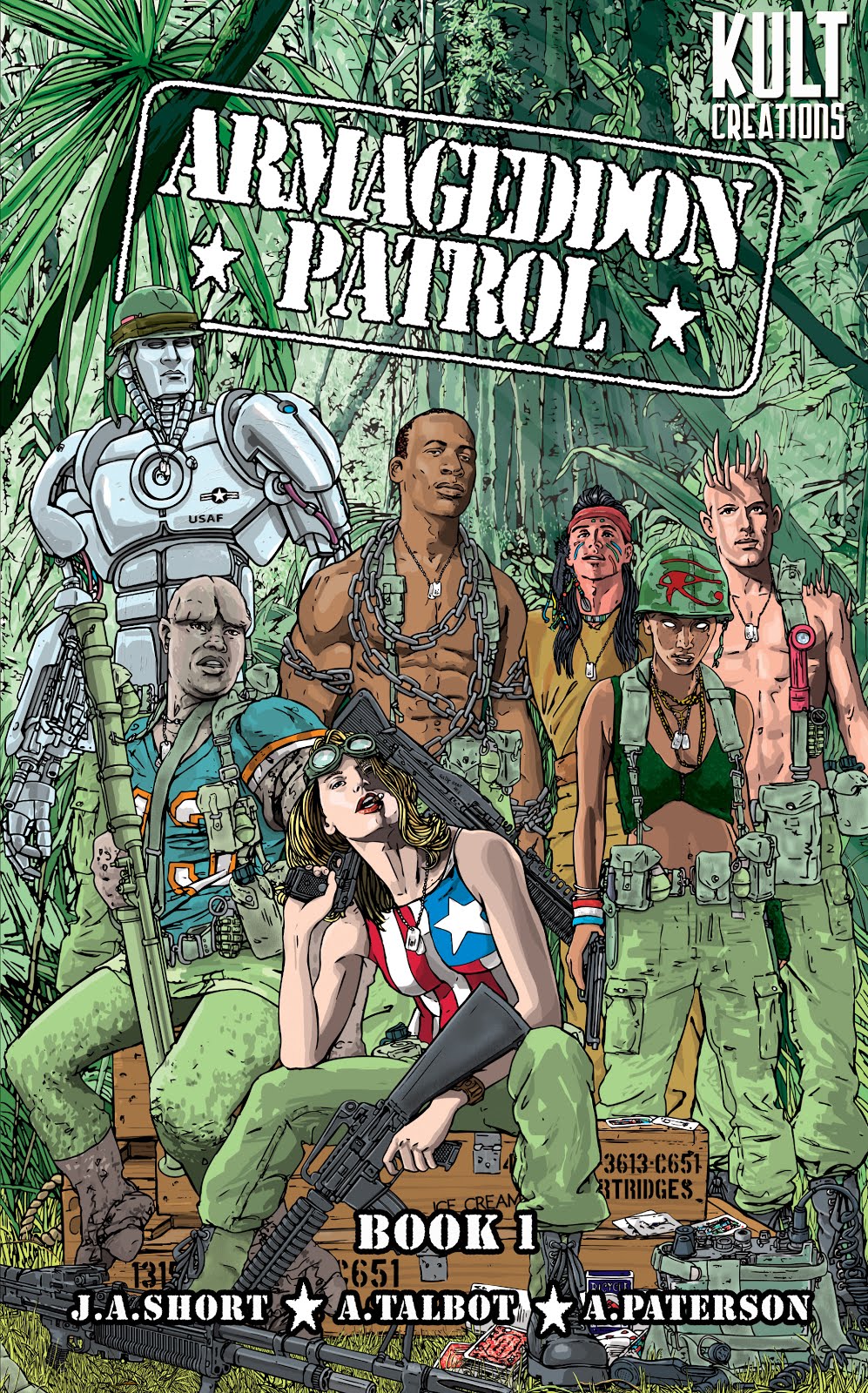 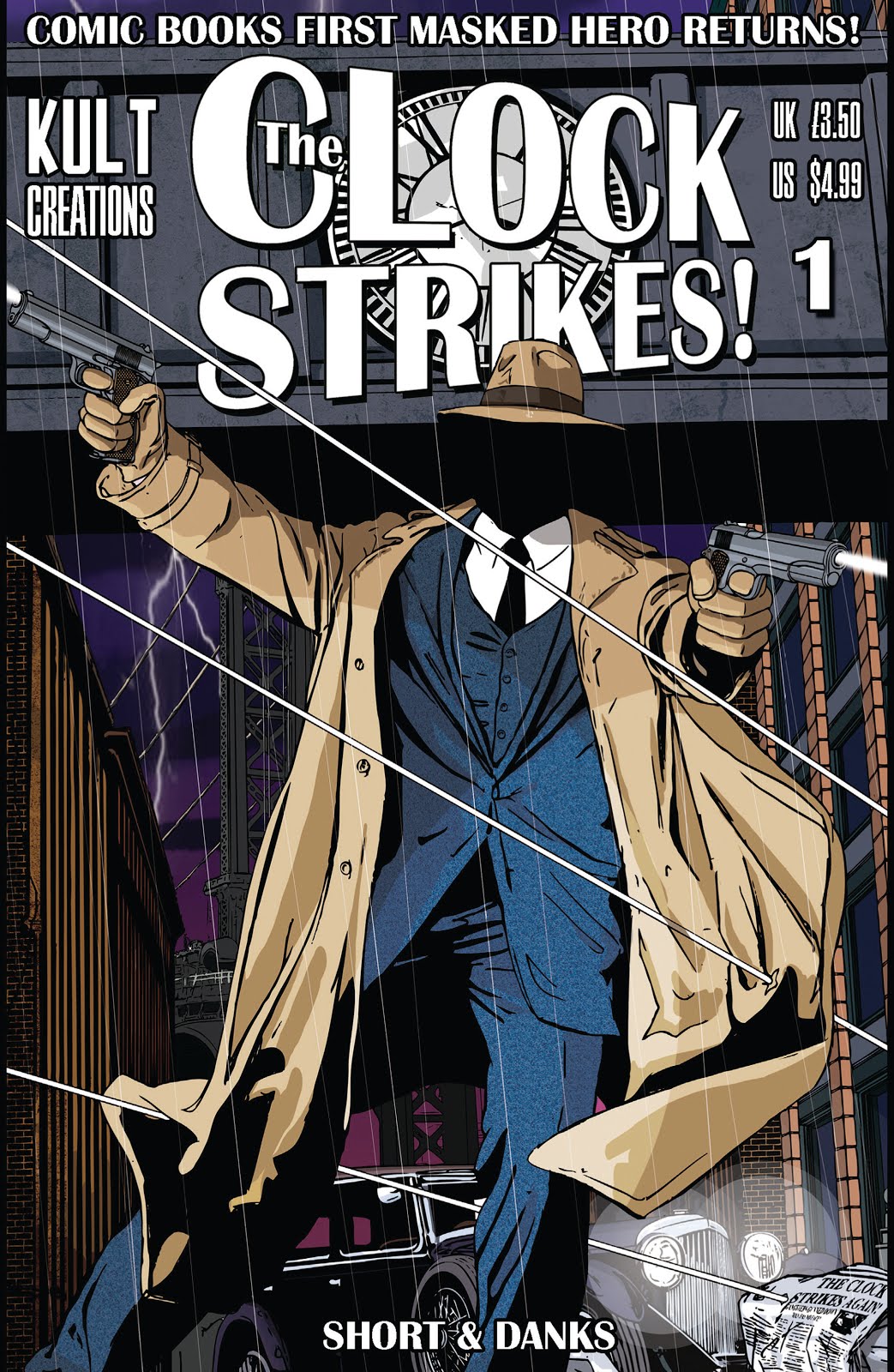 Buy THE CLOCK STRIKES! 1 below!

OUTSIDE EUROPE customers for The Clock Strikes! 1 @£6.00

Buy DIABOLICA: DOWN THE RABBIT HOLE below! 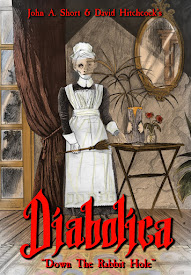 Buy DIABOLICA: DOWN THE RABBIT HOLE below!

UK customers for DIABOLICA: DOWN THE RABBIT HOLE @£3.99

Europe customers for DIABOLICA: DOWN THE RABBIT HOLE @£6.99

OUTSIDE EUROPE customers for DIABOLICA: DOWN THE RABBIT HOLE @£7.99

Buy 'The Sixpenny Murder' below! 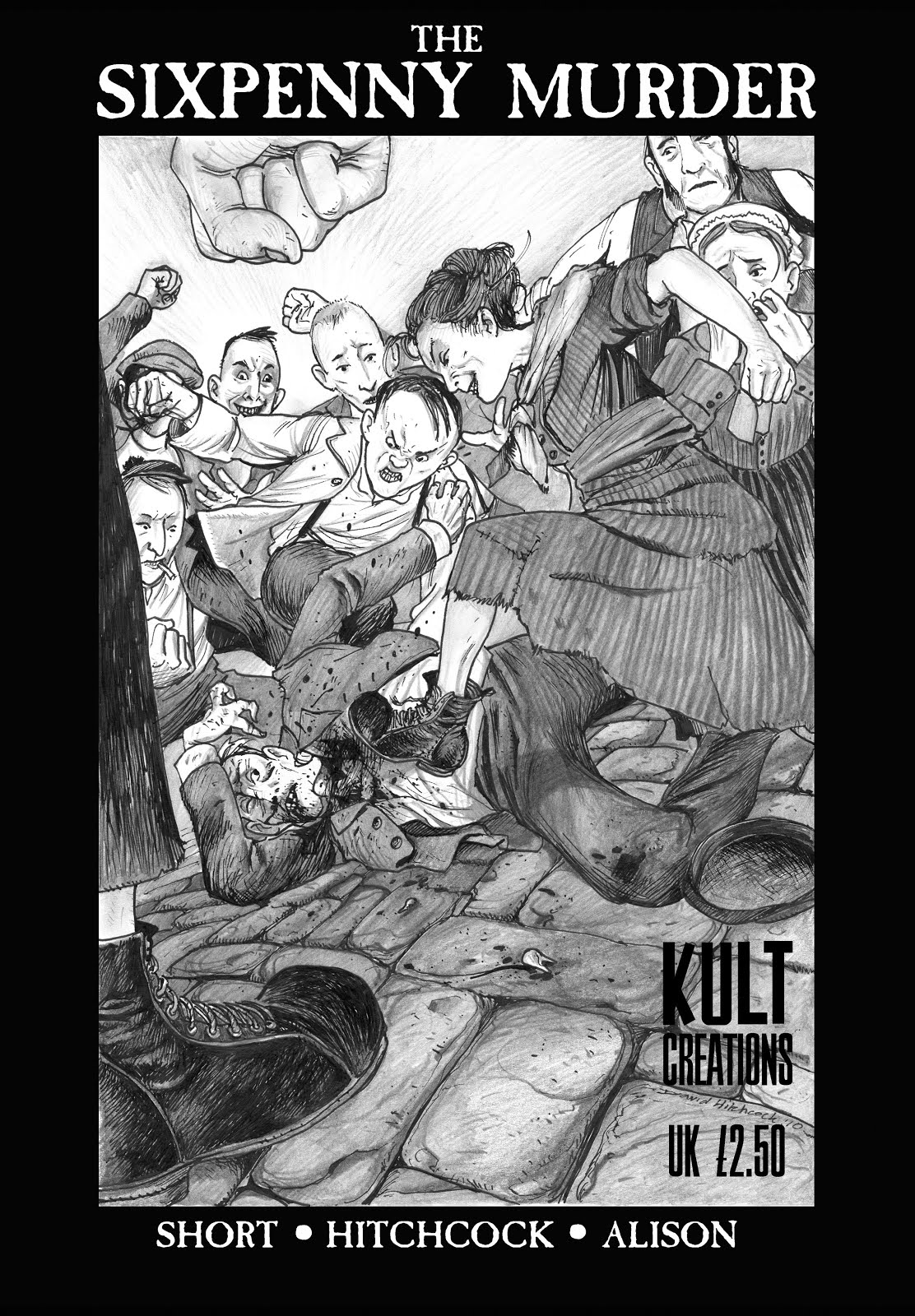 Buy THE SIXPENNY MURDER below

UK customers for The Sixpenny Murder @£3.00

EUROPE customers for The Sixpenny Murder @£4.00

OUTSIDE EUROPE customers for The Sixpenny Murder @£5.00

Buy 'OCTOBRIANA: THE UNDERGROUND HISTORY' below! 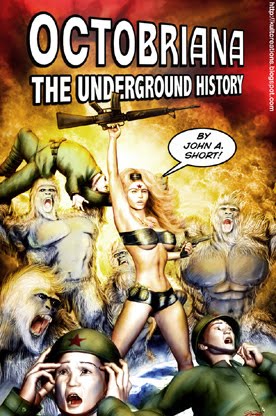 Buy 'OCTOBRIANA: THE UNDERGROUND HISTORY' below!

Outside Europe customers for Octobriana: The Underground History @£13.99 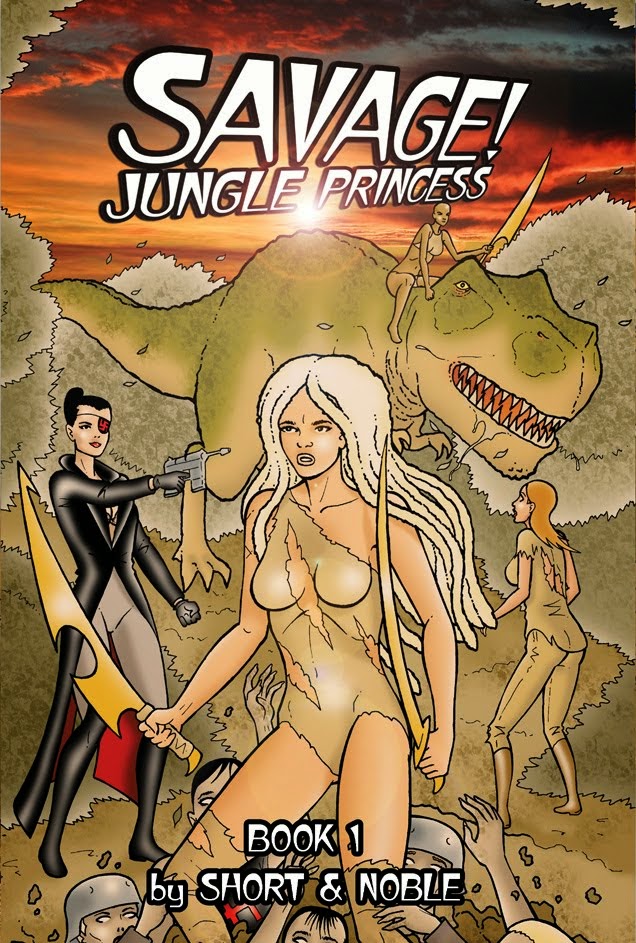 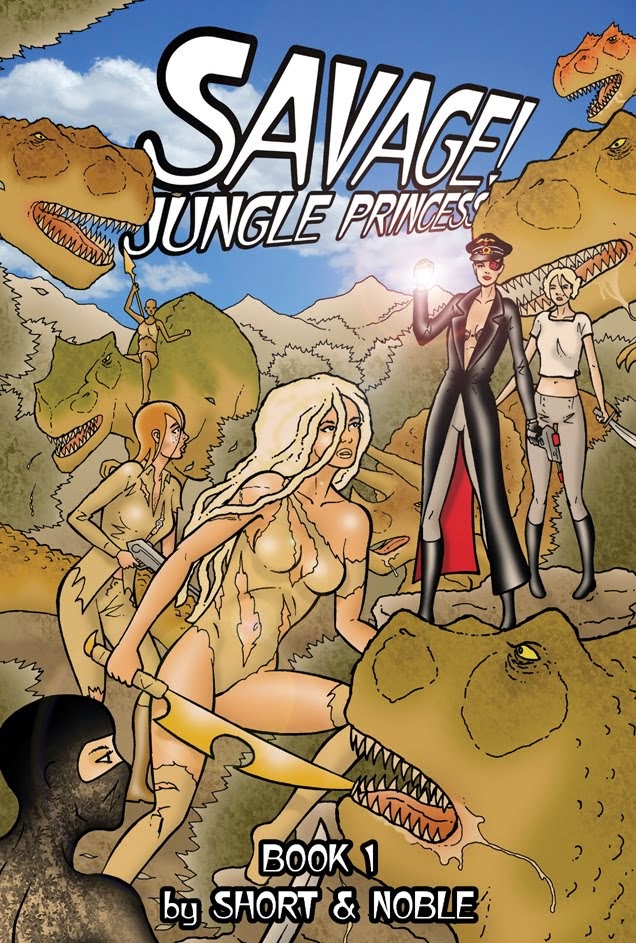 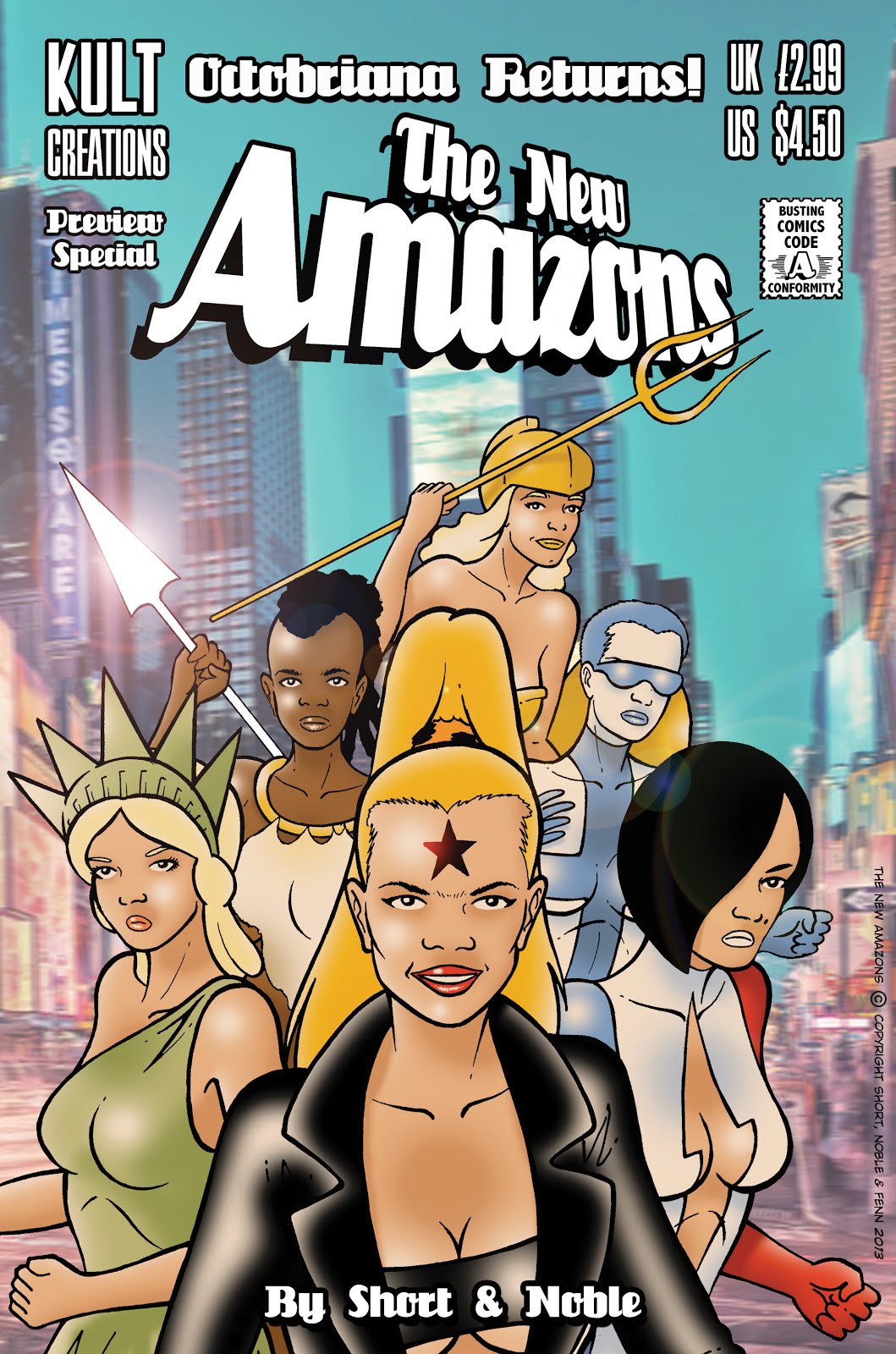 John A. Short
I’m a full-time comics creator who has worked for all sorts of different publications all over the world. For the British newsstand kid’s comic ‘Toxic’, I created the strips ‘Rex!’ and ‘Robin Hoodie’. On the internet I wrote for Hunt Emerson's ‘Ardnox High’ strip. I’ve had stories in Fantagraphics and Rip Off Comix anthologies in America. I’ve had strips in ‘Soft Secrets’ and ‘Wasted’. I’ve written for ‘Artx’ and ‘Men Only’. But in comics fandom I’m best known as the self-publisher of the small press titles ‘Octobriana’ (which won the award for Best New British Comic that year), ‘Armageddon Patrol’ and ‘Loxley’. I'm currently writing 'Ms. Fortune' for Britain's 'Mayfair Magazine'. johnashort@hotmail.com